It continues to be a rocky road this year for the markets, driven by war, rising inflation and rising interest rates. We will review what could change in the second half of 2022, offer tips for traveling, and outline the case for I-bonds.

All four major stock indices posted negative returns for the second straight quarter, as rising interest rates and growing fears of an economic slowdown fueled the continued rotation from high valuation, growth-sensitive tech stocks to the sectors of the market that are more resilient to rising rates and slowing economic growth.

Interest rates: Continual and more aggressive interest rate hikes spelled negative returns for most traditional bond indices this quarter. The good news is that rising rates also presented a buying opportunity we have not seen in several years: Certificates of Deposit (CDs). CDs currently pay 2-3% (depending on the term length) and rates are rising. We are slowly adding CDs to portfolios, building “CD ladders” as rates continue to go up.  You  may remember this successful strategy from the 1980s, which is the last time we saw inflation at the current level.

Shorter-term Treasury Bills (T-Bills) again outperformed longer-duration bonds as the market fears more rate hikes and a possible recession. We shifted portfolios to these short- and ultrashort T-bills at the end of 2021 and will remain there until we convert them into CDs while rates go up.

International: Foreign markets declined in the second quarter as the Russia-Ukraine war continued with no signs of a ceasefire in sight, and the dollar grew stronger. International markets have stayed at roughly equal losses as the S&P 500 this year.

While the volatility and market declines of the first six months of 2022 have been unsettling and painful, the S&P 500 now sits at much more historically attractive valuation levels. And at current prices, pessimism has been priced into the market, opening the possibility of positive surprises as we move forward in 2022. The third quarter will have much to say regarding the Federal Reserve’s attempt at a “soft landing” and the possibility of geopolitical improvements. 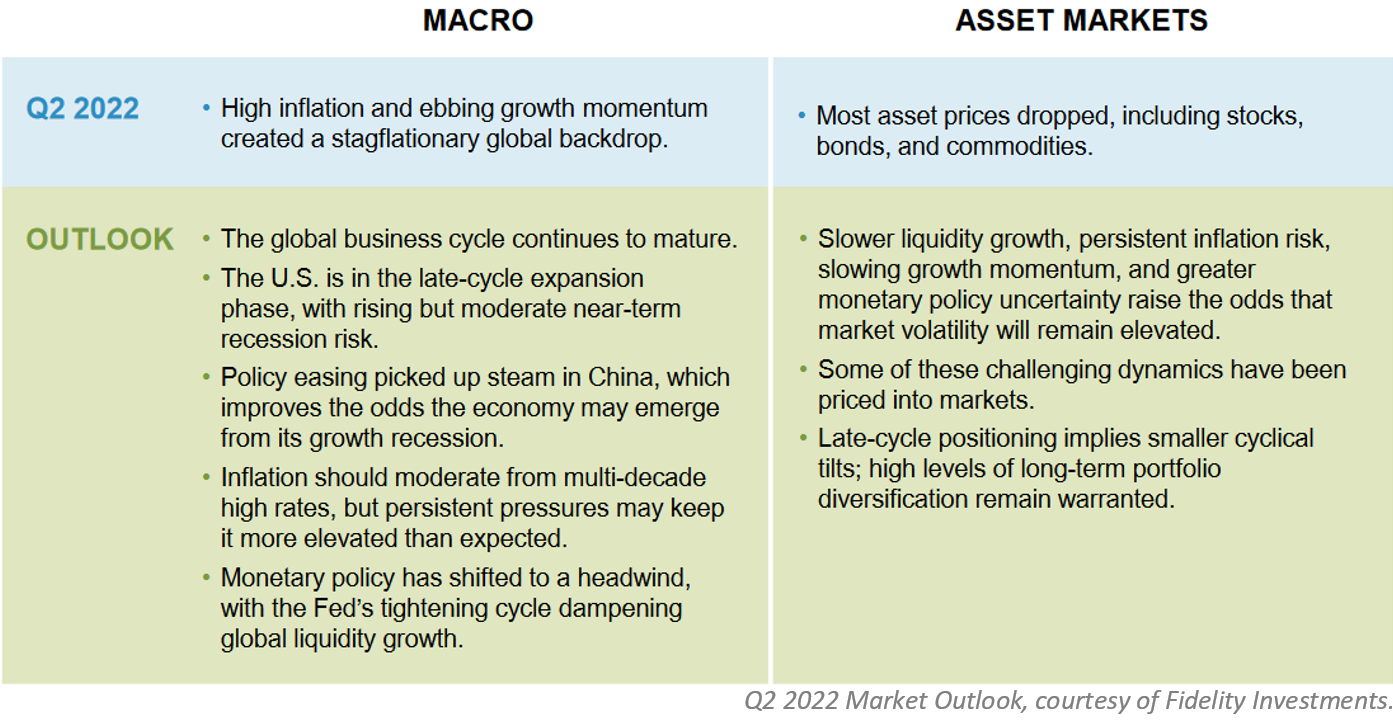 What could happen to create a positive second quarter? Two possible scenarios: first, a ‘Peace Relief Rally’ if the Russian invasion of Ukraine is resolved, possibly via a cease fire or change in leadership. Second, inflation declines and the Federal Reserve postpones or reduces rate increases after July or September.

U.S. consumer inflation accelerated to 9.1% in June, a pace not seen since 1981. Core prices, which exclude volatile food and energy components, increased by 5.9% in June from a year earlier, slightly less than May’s 6.0% gain. The graphic on the next page shows current levels vs. historical levels of inflation.

Economists generally expect price increases to continue to ebb somewhat this year, due to a decline in consumer demand and improvements to the supply chain. The critical question is the timing of the declines. 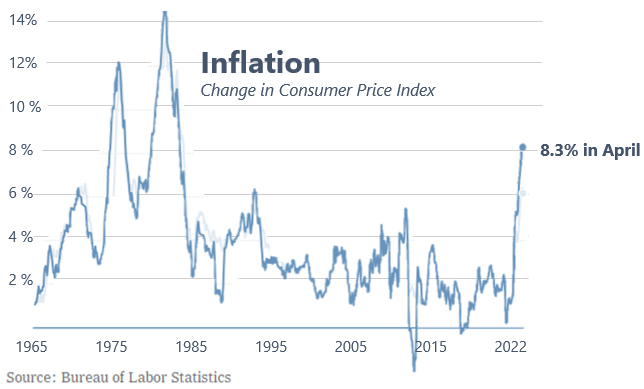 The good news is that oil prices have declined in recent weeks. This could reduce delivery costs  as well as pressure on manufacturers with significant oil inputs in products such as detergent and packaging. However, computer chips, crucial to auto production, continue to have an uncertain future, and companies are still struggling to complete vehicles. Recovery from high inflation will vary greatly by industry and  company, depending on their sourcing strategies.